Halloween Around the World

It's that time of year of teeth rotting and dressing up as your favorite character, real of fictional, scary or cute, funny or stupid. I thought I would take a look and see what other people around the world like to do on this popular holiday. I'm already working on my turnip, I have my garlic, and building my wall against aggressive polar bears. Had no idea that was a thing. The threat is real people. Cheers.

Let us start with where the holiday originated where Halloween is still celebrated as it is in the United States but you might carve out a turnip instead of a pumpkin. In the days of the Celts, when the holiday was called Samhain, to ward off evil, huge bonfires were lit and people wore ugly masks and disguises to confuse the spirits and stop the dead identifying those that had disliked them during their own lifetime.

Bobbing for apples, candy treasure hunts and games like “snap-apple,”are played around the small island country. Snap-apple is a game in which an apple on a string is tied to a door frame or tree and players attempt to bite the hanging apple. Barnbrack, a kind of fruitcake that can be bought in stores or baked at home, has a muslin-wrapped treat baked inside the cake that, it is said, can foretell the eater’s future. If a ring is found, it means that the person will have romance; a piece of straw or coin means that a prosperous year is on its way. Children are also known to play “knock-a-dolly,” a prank in which children knock on the doors of their neighbors, but run away before the door is opened. Darn kids!!! Get off my lawn!!!

Halloween is not a big day in England, however, on November the 5th, is Guy Fawkes Day and although there are some similar traditions, the celebration has little to do with Halloween. The English stopped celebrating Halloween as Martin Luther’s Protestant Reformation began to spread and as followers did not believe in saints, no reason to celebrate All Saint’s Day. In 1606, Guy Fawkes, a member of a Catholic group who wanted to remove the Protestant King James from power, was executed after being convicted of attempting to blow up England’s parliament building. So started the tradition of making effigies and burning them and children in some parts of England also walk the streets carrying an effigy or “guy” and ask for “a penny for the guy.” In recent years, the American "trick or treating" custom, together with the donning of costumes for going door-to-door, has become popular. "Remember, remember, the 5th of November."

The children's practice of "guising", going from door to door in costumes for food or coins, is a traditional Halloween custom in Scotland. These days children who knock on their neighbors' doors have to sing a song or tell stories for a gift of sweets or money. In addition to bobbing for apples, a traditional Halloween game includes attempting to eat, while blindfolded, a scone hanging on a piece of string. Traditional customs and lore include divination practices, ways of trying to predict the future. A traditional Scottish form of divining one's future spouse is to carve an apple in one long strip, then toss the peel over one's shoulder. The peel is believed to land in the shape of the first letter of the future spouse's name. I wonder after how many apples, I should just give up?

The dead return to their earthly homes led by candles and incense to a decorated altar of flowers, foods, drinks, candy, and photographs. Often around a wash basin and towel so the spirit can wash before indulging in a feast. It is Dia De Los Muertos or All Souls Day, celebrated from October 31st thru November 2nd in Mexico, Latin America, and Spain. The abundance of food, drink and good company creates a festive atmosphere along with recognizing the cycle of life by the interaction of the living with the dead. Some of these gatherings may even include tequila and a mariachi band although American Halloween customs are gradually taking over. Other festivities include people dressing up as skeletons and dancing in the streets. Often, a live person is placed inside a coffin which is then paraded through the streets while vendors toss fruit, flowers and candies into the casket. Families also attend candle lit ceremonies in church and offer prayers. The whole celebration is about life from beginning to end. Have a little fun with death before you die, why don't ya?

The Chinese celebrate the "Hungry Ghost Festival" in mid-July, when it is customary to float river lanterns to remember those who have died. Mainland China has been less influenced by the west and Hong Kong where Halloween is generally considered "foreign." Food and water are placed in front of photographs of family members who have departed while bonfires and lanterns are lit in order to light the paths of the spirits as they travel the earth. Worshipers in Buddhist temples fashion "boats of the law" from paper, some of which are very large, which are then burned in the evening hours. The purpose of this custom is in remembrance of the dead and in order to free the spirits so that they might ascend to heaven.

Halloween arrived in Japan mainly as a result of American pop culture. The holiday has become popular with young adults as a costume party and club event. The Japanese celebrate the "Obon Festival" which is similar to Halloween festivities in that it is dedicated to the spirits of ancestors. Special foods are prepared and bright red lanterns are hung everywhere. Candles are lit and placed into lanterns which are then set afloat on rivers and seas. During the "Obon Festival," a fire is lit every night in order to show the ancestors where their families might be found. Traditionally, in rural areas where grave sites are in the neighborhood, the pathway from the graves to the home is swept clean, and a general house-cleaning is also done. Great, grandma still complains of my house as a pigsty.

Trick-or treating is gradually replacing the dying tradition of Pangangaluluwâ, a local analogue of the old English custom of "souling". People in the provinces still observe Pangangaluluwâ by going in groups to every house and offering a song in exchange for money or food. The participants would sing carols about the souls in Purgatory, with the abúloy (alms for the dead) used to pay for Masses for these souls. Householders sometimes gave the children suman (rice cakes). During the night, various small items, such as clothing, plants, etc., would "mysteriously" disappear, only to be discovered the next morning in the yard or in the middle of the street. In older times, it was believed that the spirits of ancestors and loved ones visited the living on this night, manifesting their presence by taking an item. I always blame the underpants gnomes. 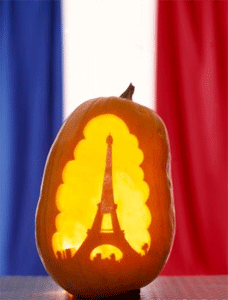 Unlike most nations of the world, Halloween is not celebrated by the French in order to honor the dead and departed ancestors. It is regarded as an "American" holiday and was virtually unknown in the country until a couple of decades ago. A combination of the French love of parties, fete's and costume events, and good 'ol commercialism has led to the quick rise of the holiday in France.

Halloween is usually celebrated by costumed people of all ages going to parties at friends' homes, restaurants, bars, or clubs. The costumes themselves tend to be of the traditional kind - mummies, ghosts, goblins, witches, and vampires - rather than cute costumes like princesses, superheroes, and cartoon characters. How about a little "whine" with that cheese."

Halloween was not generally observed in Germany prior to the 1990s, but has been increasing in popularity. It has been associated with the influence of United States culture, and "Trick or Treating" has been occurring in various German cities, especially in areas which were part of the American zone during the Cold War. Adults celebrate at themed costume parties and clubs, while children go trick or treating.

While not traditionally a part of Australian culture, non-religious celebrations of Halloween modeled on North American festivities are growing increasingly popular in Australia, in spite of seasonal differences and the transition from spring to summer. Due to the opposition to Halloween by some people, there is a growing movement where people are inviting trick-or-treaters to take part by putting a balloon or decoration on their letter box, to indicate that they are welcome to come knocking. I wonder if everyone dresses up like Hugh Jackman.

In Italy, All Saints' Day is a public holiday. On 1 November, Tutti i Morti or All Souls' Day, families remember loved ones who have died. In some Italian tradition, children would awake on the morning of All Saints or All Souls to find small gifts from their deceased ancestors. In Sardinia, Concas de Mortu (Head of the deads), carved pumpkins that look like skulls, with candles inside are displayed. Many regions in Italy have grabbed up some American Traditions with costume parties and events. Pope costume anyone?

Over the years, tourists travel to Transylvania to celebrate Halloween with costume parties, story-telling, and actors playing out Dracula inspired scenes. While some Romanians observe Halloween on October 31, St Andrew’s Night (November 30) is when the garlic is brought out as a form of protection against ghosts. Halloween is a special occasion in places like the Gothic fairy-tale castle Bran, near Brasov in Transylvania. Bran is often associated with 15th century Prince Vlad Tepes, the inspiration for Bram Stoker’s Dracula. It is difficult to know if the prince ruled over Bran Castle but it can be asserted that he was taken to Bran Castle and locked inside for about two months. Can I get a refill on my glass of neck juice?

With UK and US influence, our Northern friend has grasped onto many of the Halloween traditions that we are used to. Something unique to Canada, children also take part in a long-standing Canadian tradition of "Trick-or-Treat for Unicef". Pumpkin-carving contests, pumpkin art tours, a reading marathon, and symbolic Walks for Water are just a few examples of the educational and fundraising activities schools and children develop to help provide thousands of children developing countries with basic quality education. Fun fact: In 2014 the hamlet of Arviat, Nunavut moved their Halloween festivities to the community hall, cancelling the practice of door-to-door "trick or treating", due to the risk of roaming polar bears. Is a diet of pumpkins healthy?

Christmas Around the World